St. Julian’s kosher wine — Sholom — is back on store shelves across Michigan after a two-year hiatus. 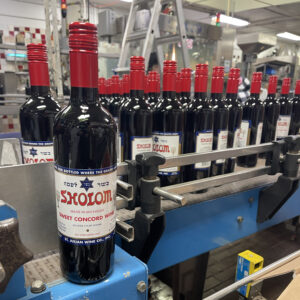 First introduced in the mid-1940s, Sholom has long been a popular offering from St. Julian Winery but has not been available since 2020. The long-time friend and rabbi the winery had worked with for years died. To be deemed kosher, wine must be made under the supervision of a rabbi, include only kosher ingredients and must be processed using equipment rabbinically certified to make kosher wines.

Sholom, a sweet concord wine, is made in Michigan at St. Julian Winery.
“Kosher certification is something we take very seriously. We want to be respectful of different communities and know that we are providing a legitimate option for those looking for kosher qualification,” said Apollo Braganini II, who is president of the family-owned winery, one of Michigan’s largest.

“Over the past few years, many people — including a local Michigan rabbi and his wife, David and Alicia Nelson — reached out to me about Sholom wine, telling me that they love the product but that it wasn’t available anymore,” said Rabbi Miller, who lives in Metro Detroit and started the kosher certification agency in 2008. “I reached out to the team at St. Julian and they also said they’ve heard from many fans of Sholom who miss it and want it back. We began discussing whether it would be possible for me to certify the wine as kosher.”

After visiting the Paw Paw winery and meeting with the team this past summer, Rabbi Miller agreed to a partnership to assist St. Julian in the production of Sholom. 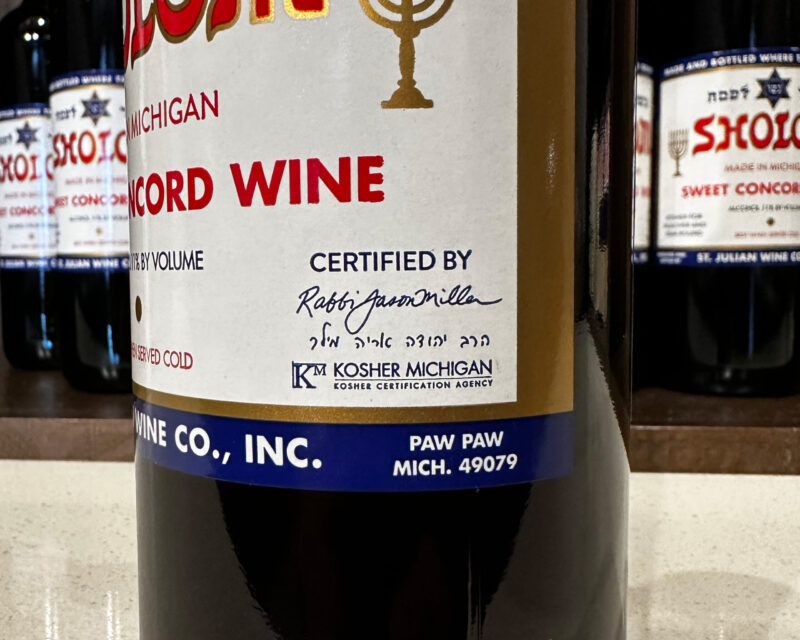 Sholom is made from Concord grapes grown in southwestern Michigan. Braganini describes Sholom as a sweet red wine, reminiscent of the company’s Sweet Revenge. The company describes Sholom as having a bright bluish-purple hue with vibrant grape aromas. The wine is 10% ABV.

“A lot of people were bummed when we didn’t have it. We’re very excited to have this product again,” said Braganini, noting the company produces about 5,000 cases of Sholom in a typical year. “It’s been a very popular product in Jewish communities. We haven’t changed anything.”

Working with St. Julian, Kosher Michigan is following the exact same kosher supervision procedures as the rabbis who previously certified Sholom wine for decades. Rabbi Miller oversees the entire process, from the harvest in September to the crushing and fermentation process. St. Julian has designated a single tank in its operations for Sholom. Miller returns later to oversee the bottling.

His goal is to make sure no additives, coloring, “or something that would make the wine not natural” are added, he said. Its kosher designation means the wine has been supervised as a kosher production. Wine is used for blessings, blessings on the Jewish Sabbath and major Jewish events like Passover and Rosh Hashanah.

“While this is the first wine that (Kosher Michigan) has certified in its 15 years of existence, it just feels like this is the right one to start with. There’s such a rich history of Sholom, a huge following, and a local Michigan connection,” Rabbi Miller said. 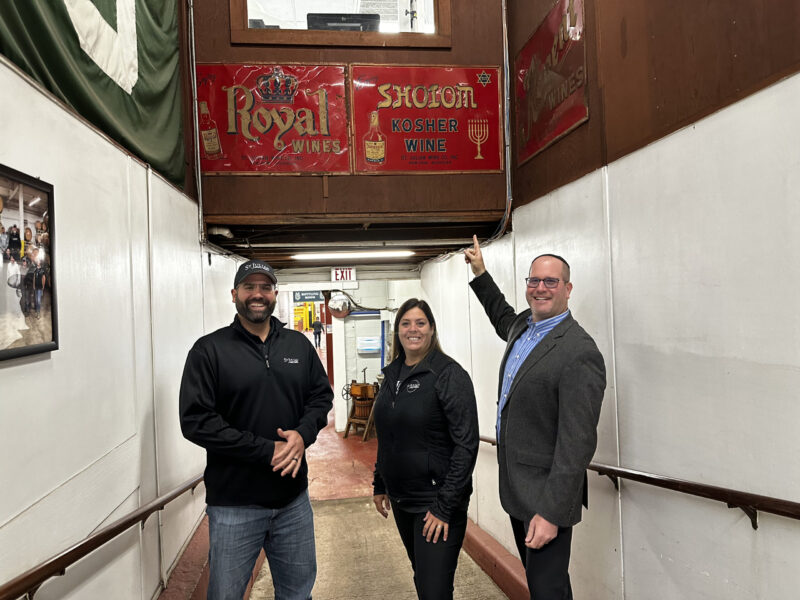 Rabbi Miller believes Sholom is the only kosher wine produced in Michigan.

Sholom wine is part of St. Julian’s long history, though it’s uncertain how its production initially came about. The company, however, has been producing altar wine since its founding in Canada in 1921 during Prohibition. The company relocated to Detroit after Prohibition and eventually moved to southwestern Michigan to be closer to the source of grapes. St. Julian still produces altar wine, once famously served when Pope John Paul II held mass at the Pontiac Silverdome during a visit in the late 1980s.

Today, St. Julian is the oldest continuously operating winery in Michigan, now home to about 170 wineries across the state.

For Rabbi Miller, certifying Sholom as a kosher wine was something of a coincidence. Earlier in his vocation as a rabbi, someone gave him a metal sign advertising Sholom wine and Paw Paw. “I’ve had it all these years,” he said. “I built a bar in my basement and hung it on the wall. I never thought it would be my signature on those bottles of wine one day.”

The Sholom label includes his signature and the Kosher Michigan symbol, certifying that it is kosher.