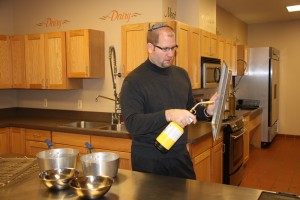 “I see an uptick,” said Rabbi Paul Plotkin, chairman of the kashrut subcommittee of the Committee on Jewish Law and Standards, the legal body of the Conservative movement.

That’s beginning to change, say Conservative rabbis active in the field. It’s partly due to the energy generated by the Magen Tzedek initiative, which will rate kosher food manufacturers according to prescribed standards of ethical behavior regarding workers, animals, the environment and financial dealings. It’s also a natural extension of Conservative interest in promoting kashrut, rabbis in the movement say.

“Our rabbis are as knowledgable about kashrut as their Orthodox colleagues, and care about it as much as they do,” said Rabbi Julie Schonfeld, executive vice president of the Rabbinical Assembly, the movement’s main rabbinical group. “But our emphasis is on raising Jewish adherence to kashrut observance rather than professional ritual kashrut supervision. Magen Tzedek is our unique contribution to building awareness around the impact that kashrut is intended to have upon our full development as Jews.”

The Magen Tzedek is being tested at three kosher plants to see how well the auditing process works. Once testing concludes after Passover, those three manufacturers will go through the actual Magen Tzedek evaluation procedure, and the first kosher foods carrying the new seal should be on supermarket shelves before Rosh Hashanah, according to commission co-chair Rabbi Michael Siegel.

The identity of the companies involved in the trial is being kept under wraps, but at least one is a “major food producer,” according to Rabbi Morris Allen, Magen Tzedek’s program director.

Conservative Judaism, like Orthodoxy, accepts the Torah’s commandments as obligatory, including kashrut. While the same general laws of kashrut apply, there are some distinctions — notably the standards governing wine, cheese and certain fish.

In 2008, Rabbi Jason Miller of Detroit founded Kosher Michigan, which certifies nearly 30 products and establishments. In addition to the bakeries and ice-cream parlors typically supervised by Conservative rabbis, Miller oversees a company that makes dried wheat used as an ingredient in other kosher products, and in March he opened the glatt kosher dining plan at Michigan State University.

“I got into this reluctantly, but once I did, it became a passion and a mission to show that kosher-observant individuals need not rely on Orthodox hashgachah,” he said, using the Hebrew word for kosher certification. “I wasn’t waving the banner five or 10 years ago, but once I became part of the kosher certification world, I realized the injustice of the Orthodox monopoly.”

In Minneapolis-St. Paul, a group of Conservative rabbis launched MSP Kosher last July. Headed by Rabbi Avi Olitzky of Beth El Synagogue in St. Louis Park, the agency does not charge for its service, which Olitzky says is aimed at providing more kosher food for Jews who do not necessarily adhere to the stricter standards required by Orthodox supervision, such as glatt kosher meat.

“Plenty of people in the Jewish community who keep kosher will eat dairy out,” he says. “I’m not interested in going into hashgachah as a business. I don’t think it should be a business.”

In the past two decades, Conservative rabbis have spearheaded lawsuits challenging a number of states’ kosher laws on the grounds that they constitute government interference in religious matters. In every case, the courts agreed that the existing laws indeed privileged Orthodox definitions of kashrut and overturned them. New kosher laws in those states only require that establishments advertising themselves as kosher disclose their kosher standards, not that they subscribe to Orthodox certification.

“It’s a fair, nonsectarian way to acknowledge there are different approaches to kashrut,” said Rabbi Shalom Lewis, who was behind a recent case brought on his behalf in Atlanta by the American Civil Liberties Union.

Orthodox reaction to these legal challenges has varied from shrugs to protestation. In New York and New Jersey, Orthodox rabbis in charge of enforcing the new laws say they do a disservice to kosher consumers who, the rabbis say, are interested only in Orthodox certification.

In Georgia, Rabbi Reuven Stein, director of supervision of the Atlanta Kashruth Commission, said he was “disappointed” by Lewis’ lawsuit, calling it unnecessary and unhelpful.

“Conservative rabbis do give hechsherim, and we’ve never had an issue with it,” he said, using the Hebrew word for kosher certification.

Conservative leaders long have said that Magen Tzedek is not a replacement for Orthodox kosher certification, and only will be given to manufactured products already carrying a recognized kosher label, or to raw products such as fruits and vegetables that don’t need certification.

Even so, the Magen Tzedek leadership characterizes its relationship with the Orthodox Union, whose label will appear on two of the three first products carrying the new ethical seal, as friendlier than the OU describes it.

Rabbi Menachem Genack, CEO of the OU’s Kosher Division, stands by the position he articulated soon after the May 2008 immigration raid on the Agriprocessors kosher meatpacking plant. The Iowa plant’s demise pushed the Magen Tzedek project to the front burner of Conservative movement priorities.

“We believe that all these important issues — the environment, workers’ rights and so on — are most effectively handled by government agencies that have the expertise and the mandate to monitor them,” Gernack told JTA.

He said the OU was “dismayed” at Allen’s appearance on a recent episode of the TV show “American Greed” devoted to former Agriprocessors CEO Sholom Rubashkin, who is now serving a 27-year prison sentence for financial fraud.

“The sentence is a travesty,” Genack said.

That doesn’t mean the OU will hinder Magen Tzedek or any other additional certification a kosher food manufacturer might seek.

“If there is a company that wants to use Magen Tzedek, we will not object to it appearing on the label. We also would not object to them putting halal on their label,” Genack said, referring to Muslim dietary laws. “These are marketing decisions the company makes on its own.”