Kosher wine is again made in Michigan.
If Michigan-made sweet kosher wine pleases your palate, thank Alicia and David Nelson for making it available.

Alicia discovered Sholom, a kosher sweet Concord wine, soon after her husband retired as rabbi of Congregation Beth Shalom in 2003.

In retirement, Rabbi Nelson officiated several times a month at Temple Israel in Bay City (now merged with Temple Beth El of Saginaw to be Temple Beth Israel). The congregation used Sholom wine at the after-service kiddush. The Nelsons liked the taste, and they liked the fact that it was Michigan-made. Working with a drugstore in Oak Park, the Nelsons would buy a case several times a year. 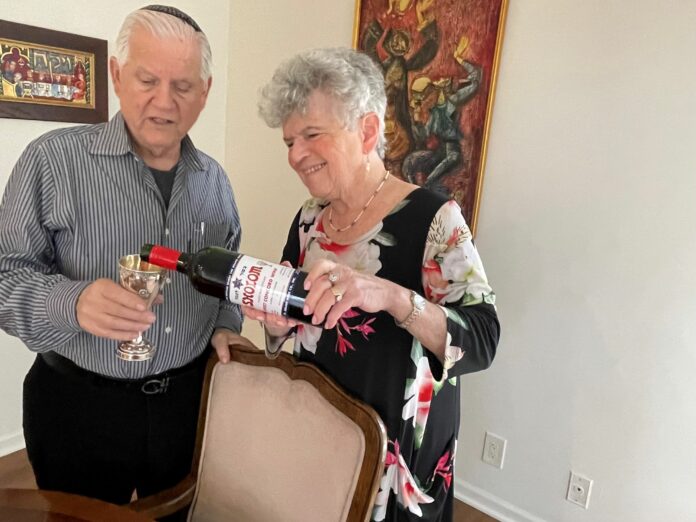 The Nelsons were nonplussed when the store told them a year or so ago that Sholom wine was no longer available.

The wine had been produced by St. Julian Wine Company in Paw Paw, Michigan, a town the Nelsons pass through frequently as they drive I-94 to their second home in Bridgman, near Benton Harbor. They visited the company’s store and talked to the manager. They learned that the Chicago rabbi who for many years had supervised the production of the kosher wine had died, and no one in his family wanted to take over that responsibility.

St. Julian traces its origins to 1921, during the Prohibition era when Border City Winery was founded in Ontario. The St. Julian Wine Company broke off as a separate entity in 1941, headquartered in Paw Paw.

The winery is headed by Apollo Braganini II, the great-grandson of the founder, Mariano Braganini, and his wife, Avelia. During World War II and well into the 1950s, the company built its volume on juice-grape-based wines, particularly Concords.

Mariano engineered a method for shipping tankfuls of wine — 1,000 to 3,000 gallons at a time. The company would ship bulk quantities of its Concord wine to a well-known New York winery to supplement its production of kosher wine. Eventually, St. Julian started making its own-label kosher wine, Sholom, producing 5,000 cases annually.

Sholom wine gained enthusiastic customers in Detroit and Chicago, which have large Jewish populations, but it is shipped to almost every state. “This particular wine has one of the strongest followings in our customer base,” said Apollo Braganini II.

Alicia Nelson asked the company’s managers if they’d be interested in finding another mashgiach to supervise the production of the wine, and they were. She contacted Rabbi Jason Miller, head of Kosher Michigan, a kashrut supervising agency, who agreed immediately.

“Someone gave me a metal sign with the Sholom wine logo on it. It has hung on the wall by the bar in my basement for several years,” said Miller. “I never thought that my signature would appear on the label of this iconic bottle of wine!” 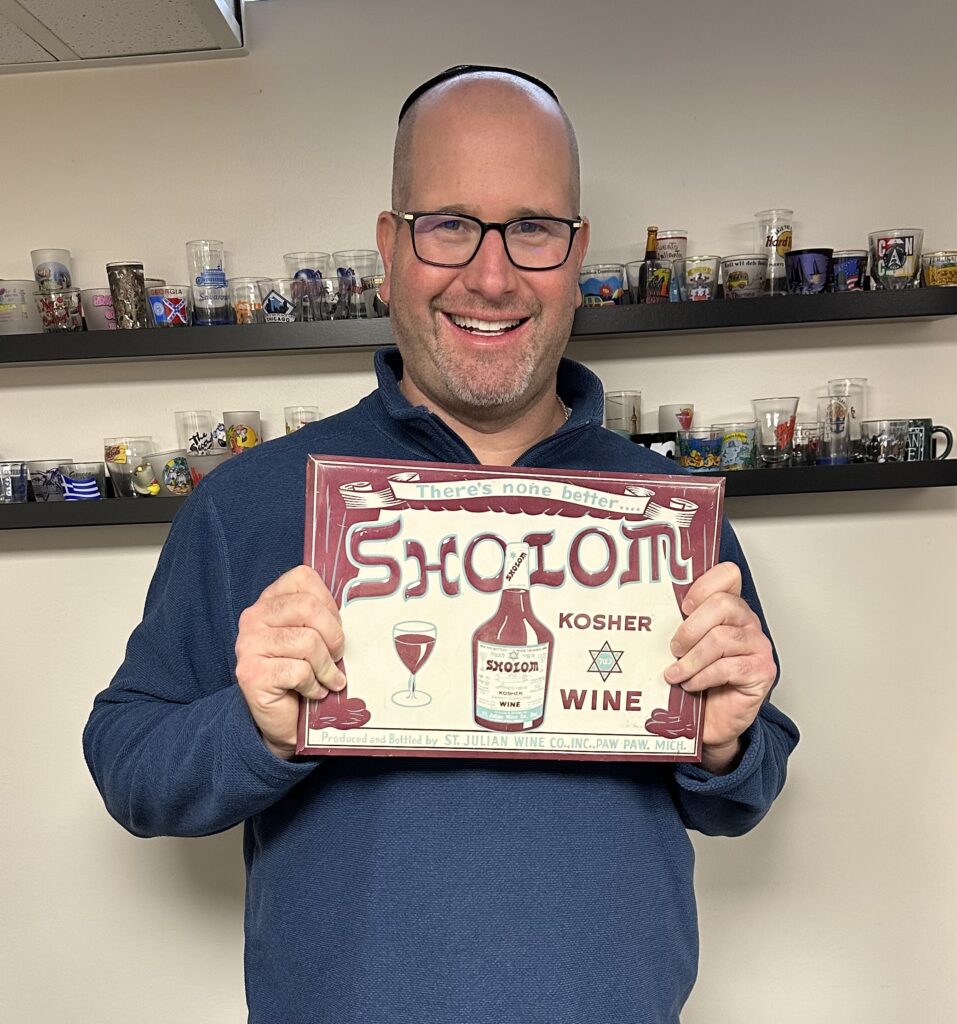 For a wine to be certified kosher, its production has to be supervised by a trained Jewish person from start to finish. Miller started last summer by overseeing St. Julian’s Concord grape harvest and the heating, fermentation and filtration of 20,000 gallons of juice to make sure no preservatives or artificial colors were added. He personally turned on the machines that heated the grape juice and supervised the rest of the production process, which took 40 days. 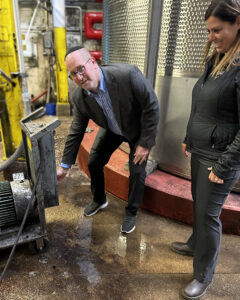 “Kosher Michigan is following the exact same kosher supervision process as the rabbis who previously certified Sholom wine for many decades, so there should be no concern that the highest kosher standards are not being followed,” said Miller.

Kosher Michigan certifies thousands of products throughout North America and India. Miller said he hopes to certify other St. Julian products as kosher. “I look forward to a longtime relationship with the winery,” he said.

As for the Nelsons, they purchased a case of Sholom from Lincoln Rx Pharmacy in Oak Park as soon as they could. They serve the wine on Shabbat and Jewish holidays and have given some to friends. They were happy when Congregation B’nai Shalom in Benton Harbor, where Nelson officiates once a month, also started using it again.

St. Julian has a Detroit-area tasting room and retail store in Troy. Other outlets, in addition to the one in Paw Paw, are in Dundee, Frankenmuth, Rockford and Union Pier.