Why is 41% of America’s Packaged Food Kosher

Less than 2% of the US population is Jewish. So why is 41% of the country’s packaged food kosher?

Considering how few people keep kosher in the US—Jews make up less than 2% of the American population, and only a portion of them follow Jewish dietary laws—it’s fairly astounding that more than 40% of the country’s new packaged food and beverage products in 2014 are labeled as being kosher. That makes it the top label claim on food and beverages, according to market research firm Mintel, beating out the ever-present “gluten-free” label and even allergen claims.

“Kosher” food meets the broad range of requirements of Jewish dietary laws. The laws define, for example, which animals are and are not allowed to be eaten (cows and chickens are ok, pigs and shellfish are not), as well as how the animals are slaughtered, and how their meat is prepared; the laws also lay out which foods can and cannot be mixed (no meat with dairy, for example), and even, when it comes to wine, who is allowed to touch it.

To be certified as kosher, food companies must work with certification bodies like the Orthodox Union (“OU”), which says it certifies an estimated 65% to 71% of kosher foods, an endeavor that involves both paperwork, on-site supervision, and payment to the certifying bodies.

In 2009, market research firm Packaged Facts estimated the kosher industry to be worth as much as $17 billion. And the label’s relative popularity seems to be growing: While it was on only 27% of packaged foods in 2009, in 2014 it appeared on 41%. New business for OU certifications grows by about 10% each year, according to Phyllis Koegel, the group’s marketing director. 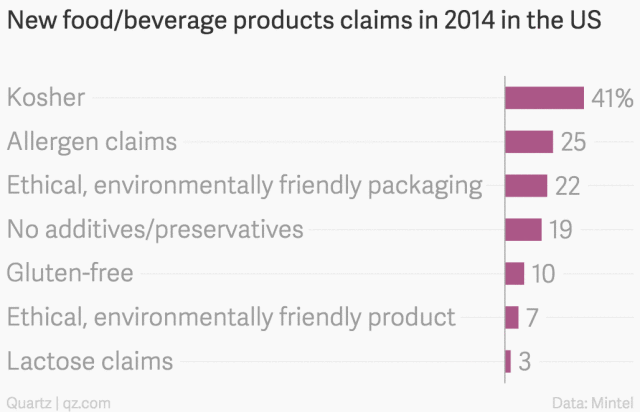 But if less than 2% of Americans are Jewish, and not all Jews even keep kosher (an estimated 80% to 85% don’t), then who is buying all of this kosher food?

“[T]here are other consumer groups that buy these foods,” Amanda Topper, a food analyst at Mintel, tells Quartz.

Muslims are one such group, she says. While there are even fewer Muslims than Jews in the US, their numbers are growing. They now account for 0.9% of the US population, according to the Pew Research Center, up from 0.4% in 2007. Muslims have their own set of dietary laws, called halal. But “if they’re not able to find halal, they rely on kosher,” says Koegel. 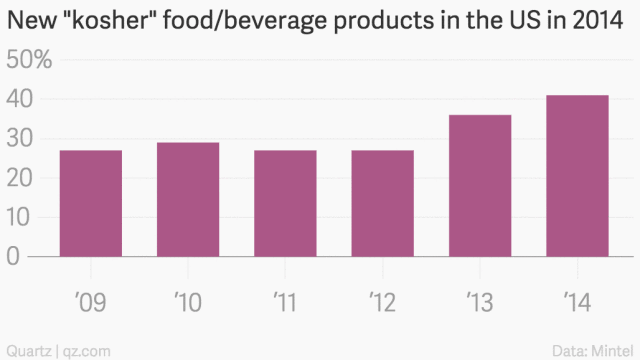 However, there are differences between kosher and halal, and not everyone agrees with OU and Mintel’s assessment: “We have no statistics to indicate any appreciable number of Muslims seek kosher products,” says Roger Othman, CEO of the Islamic Food and Nutrition Council of America.

Many consumers go for kosher foods for completely non-religious reasons. Some “gravitate toward kosher products for positive health or taste perceptions, or for vegetarian reasons,” says Topper. Others buy kosher to avoid certain allergens, like shellfish. But not all of these reasons are based on a correct understanding of what “kosher” actually means.

The word “kosher,” says Koegel, has connotations of healthfulness and cleanliness. But as she points out, plenty of kosher foods, like OU-certified candy, are decidedly unhealthy. As for cleanliness, she says, the OU does provide an extra set of eyes on a facility and wouldn’t certify a company that wasn’t meeting its standards. (But whether it upholds its own standards has been questioned.)

Some of the kosher market’s expansion has come from already popular, non-kosher foods making the switch, like when Oreos removed lard and got certified in the late 1990s. And now and then the kosher aisle will have a cross-over hit, like when Lil’ Kim rapped about Moscato wine in 2005, and Bartenura, a kosher wine company, became an unexpected favorite for hip-hop musicians and their fans.