Much of the criticism against Hebrew National in the past has more to do with “kosher politics” than it does with actual kosher standards. In fact, the reason why many don’t consider Hebrew National meat (most notably their hot dogs) to be kosher is because they are not glatt. Several months ago, I wrote on this blog about what “glatt kosher” means and why there is such a misunderstanding about it.

A leading Orthodox rabbi (Rabbi Yitzhak Abadi of New Jersey) and also the Committee on Jewish Law and Standards of the Conservative Movement’s Rabbinical Assembly (including kosher experts Rabbi Joel Roth, Rabbi Mayer Rabinowitz and Rabbi Paul Plotkin) have publicly stated that Hebrew National is truly kosher for those who do not eat only glatt meat. The three Conservative rabbis traveled to Hebrew National’s headquarters to inspect the facilities.

However, this class action lawsuit argues that ConAgra, the parent company behind Hebrew National, cut corners in the slaughtering process and that the head of Triangle-K, the certifying agency, did little to correct the transgressions.

According to the American Jewish World News, the complaint runs approximately 65 pages and notes that employees “who made the complaints were terminated or otherwise threatened with adverse retaliation, such as job transfers to other facilities or states. In turn, non-kosher meat was delivered to ConAgra and packaged, labeled and sold to the public [including the plaintiffs in the lawsuit] as strictly 100% kosher.”

The lead attorney for the plaintiffs, Hart Robinovitch, told the American Jewish World, “Don’t get me wrong here: We’re not saying that they’re passing off pork as kosher products… but in the complaint, as you can see, we went through the different elements and the different requirements for meat to be considered kosher, in terms of the way the cows are slaughtered, and the meat is prepared; and based on our investigation, there were certain things that weren’t conducted properly, in a systematic way, from the way cows were slaughtered, to the way the lungs were inspected or not inspected for imperfections, as is required to meet the standard that the meat is 100 percent kosher.” 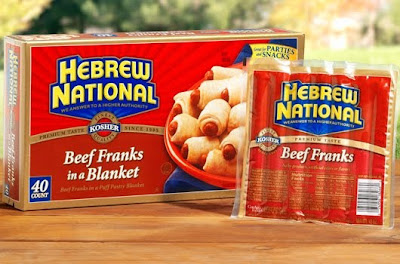 According to the lawsuit, the plaintiffs thought they were buying products that were 100 percent kosher. If that means the plaintiffs thought they were buying glatt kosher meat and surprised that it wasn’t, I don’t think that’s cause for a lawsuit. Hebrew National and the Ralbag family rabbis who run Triangle-K have been clear that Hebrew National is not glatt. Therefore it isn’t deception.

However, if Hebrew National has been using non-kosher meat (non-glatt does not mean non-kosher or treif) then the class-action lawsuit has merit.

There are many different levels of kosher observance. Thus, it is difficult to have a secular court rule on whether a company is claiming its meat to be 100% kosher but it actually is not 100% kosher for some consumers.

I am irritated when I hear the Hebrew National hot dogs being marketed as “kosher hot dogs” at Detroit Tigers baseball games when in fact they are cooked on the same grill as the non-kosher hot dogs and sausages. Further, the buns they are wrapped in are dairy thus violating the kosher law against mixing dairy and meat. However, I also recognize that for some fans at the baseball stadium the fact that the hot dogs are kosher is satisfactory enough for them.

Whenever a food is advertised as kosher, it is caveat emptor – buyer beware. It is important to do a little research before eating the product. In the case of Hebrew National, it is well documented that their meat isn’t glatt which means not 100% kosher for some people. If that is the rationale for the class action lawsuit, I say it’s frivolous. If, however, Hebrew National and its parent company ConAgra, is guilty of cutting corners and passing off treif meat as kosher, then I think this lawsuit is legitimate and Hebrew National will have to answer to an even higher authority.